**This post contains affiliate links and I will be compensated if you make a purchase after clicking through my links. As an Amazon Associate I earn from qualifying purchases.

Opinions expressed are based on the Author’s own experience.

Every single wedding photographer catches the gear bug at some point in time. It’s almost like the common cold, it comes and goes once in a while (and you build some resistance to it but suddenly BAM – it hits you).

For wedding photographers who are heavily invested in their existing system (e.g., Nikon, Canon, Fujifilm), switching camps is a costly exercise. I would know because I’ve made the very same brand switch not just once, but a few times.

Therefore, if you’re a wedding photographer who is feeling the seductive pull of moving to Sony mirrorless, then this article will be of assistance.

One of the reasons that stopped me from switching to Sony (from Nikon) was the perception that Sony didn’t have a profession lens line-up. This was quite possibly quite true many years ago but at the time of writing, Sony has a significant arsenal of fast zoom lenses and fast primes.

The Canon EF 24 f/1.4L II USM is a popular lens for many wedding photographers. It is great for contextual shots and if you’re a wedding photographer who loves to get up and personal with your subjects – the 24mm focal length is perfect. Luckily for you, Sony has the FE 24mm f/1.4 GM  .

Personally one of my favorite focal lengths, I cannot photograph a wedding without the 85mm focal length. Fujifilm, Nikon, and Canon all have their flagship 85mm (or equivalent in the case of Fujifilm) lenses. For those of you sitting on the fence, you will be pleased to know that there are a few options for you to choose from.

First off is the crème de la crème – the Sony FE 85mm f/1.4 GM. With its wide aperture, it offers incredible subject separation.

Then there is the ZEISS Batis 85mm f/1.8  that has many fans and also the budget-conscious Sony FE 85mm f/1.8 that doesn’t pull any punches. You may also wish to consider the Sigma 85mm f/1.4 DG GSN Art for Sony.

Canon wedding photographers love their 135L (for good reasons). If you’re in this camp, you will be pleased to know that Sony has an FE 135mm f/1.8 GM to fill the gap.

The 24-70mm and 70-200mm focal ranges have been a staple for many wedding photographers, especially when paired with a fast f/2.8 constant aperture. The main advantage of using these pro zoom lenses is the versatility in reach without having to change lenses or move.

In many real-world weddings, it is not possible to get to the ideal spot and wedding photographers often resort to cropping in post or using a zoom lens.

It’s not a focal range that dominates the wedding day but for certain situations, this versatile ultra-wide perspective comes in handy. After all, when in cramped quarters, there is only so much that one can step back before running out of space.

You will also be pleased to know that Tamron offers a popular economical 28-75mm f/2.8 Di III RXD in native Sony E mount.

For existing Canon wedding photographers who may own an EF 70-200mm f/2.8L IS III USM, there is good news for you. With a third-party adapter such as the Metabones V or Sigma MC-11, you can mount your Canon 70-200mm onto your Sony mirrorless camera with full eye AF functionality. 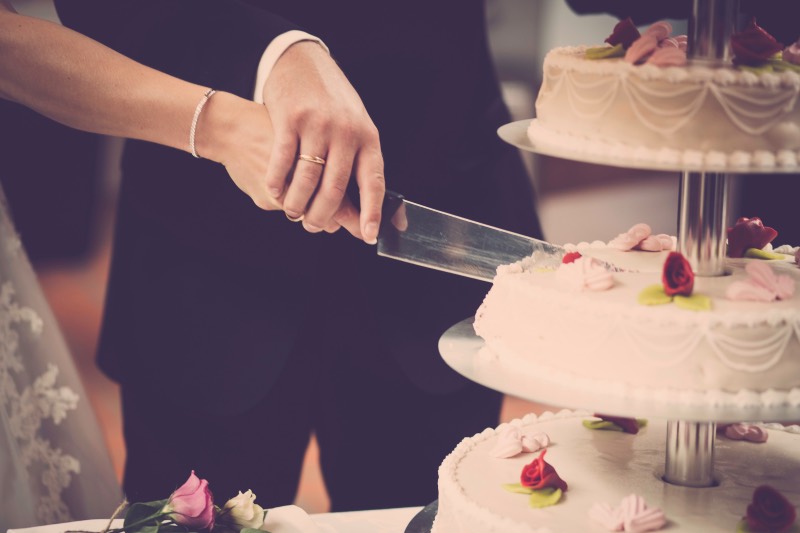 Photo by Rene Asmussen from Pexels

You’re probably considering switching across to Sony because of a certain Sony mirrorless camera.

Most wedding photographers wanting to make the transition will be doing so from a DSLR. One of the biggest advantages of a mirrorless camera compared to a traditional DSLR is not so much the size and weight, but rather, having an electronic viewfinder (EVF).

Where DSLR camera bodies had optical viewfinders, the benefit of an EVF is that it makes getting the exposure of each frame so much easier. For a wedding photographer, this feature is a welcome addition as it allows them to turn their attention on their subjects.

But in all honesty, you’re probably tempted to ditch your current Nikon/Canon/Fujifilm setup because of one amazing feature: eye AF. As someone who has been using eye AF at weddings for almost a year now, eye AF meets the hype (although it requires a bit of practice).

The Sony a7 III is probably the perfect replacement for Nikon D750 and Canon 5D MK III owners who want an all-rounder budget-friendly camera. For Canon EOS 5D MK IV, EOS 1D X Mark II, Nikon D850, and Nikon D5 owners, who may want a more high-end camera, the Sony a9 may be for you.

If you’re a wedding photographer who does a little bit of video on the side, the Sony a7 III may be a better choice since it has a full set of customizable picture profiles that the Sony a9 does not. Both Sony mirrorless cameras offer 4K internal video recording up to 25fps in PAL and 30fps in NTSC mode.

Before the Sony a9 and Sony a7III (which won 2018 EISA Photography Awards), the Sony a7S II was a popular choice for wedding videographers because it offered very high ISO performance.

As much as wedding photographers prefer working with natural light, having external lighting is a must for situations where the ambient light is inadequate.

The HVL-F60RM is Sony’s flagship flash. It is similar to the Canon Speedlite 600EX II-RT and the Nikon SB-5000 in functionality (e.g., wireless radio communication, multi-flash control, high-speed sync).

Compared to the earlier model  Sony HVL-F45RM, the newer HVL-F60RM has a higher output and improved overheating protection.

One critical piece of information that most articles omit is the fact that all mirrorless cameras cannot detect IR focus beams. For wedding photographers who rely on IR focus beams, this will be the biggest learning curve to overcome when switching across to Sony mirrorless.

Thankfully, the Sony HVL-F60RM has an LED array that acts as a modeling lamp so that in dark situations, our Sony mirrorless camera can achieve focus.

Daniel is a self-taught wedding photographer and filmmaker who also writes for Shotkit - an online resource for photographers to learn, be inspired and grow their business. He is addicted to coffee. In fact, right now, he is thinking about his next coffee.